When I left Calgary I kept an open mind to where my next experience might be. I tried not to think about how my skills had narrowed to a level that wasn’t really useful anywhere else.

In the past I’d avoided trying to go further, that is to say, I shied away from Michelin level work in the UK for two reasons:

I was afraid I couldn’t cut it.

Michelin doesn’t live in Canada. There are few restaurants that could, if they considered us, gain a star or two. They are in Vancouver, the Rockies, the Toronto area, and that’s about it.

I’ve worked with people who’d set their careers at the Michelin level, then taken jobs in more casual places, either because of location or demotion or stress, and they’ve struggled. Brilliant chefs, highly technically inclined and ridiculously devoted, hard workers, who just can’t keep up with bistro level. If there is anything I can say about the fine dining industry, it’s easier to go up then to come down.

I pushed myself to produce some really neat things that for me were fulfilling creatively before I left Calgary, knowing that I’d not have the chance for several months due to new training. I didn’t expect any employer to take me on and give me carte blanche for the menu immediately.

Of course I’d also tried to remind myself that not only had I been fortunate to have complete freedom in Calgary (along with a good deal of responsibility and stress that found me ill for a majority of my stay), but I was lucky to work for a Chef who responded so positively to my desire to push the dessert menu to new heights, even using it to push himself regarding the rest of the menu.

While I love to be useful in a kitchen, and have over the years taken on more responsibility than is expected in general, I wasn’t prepared to be hired as a pastry chef to be tricked into working as a kitchen bitch.

This bitch is supposed to make cake, she does not prep and cook lunch with little to no help, nor does she clean up filthy kitchens while others scoff she’s in the way, leaving her a few (2) hours in the afternoon to devote to her career and specialty while trying to not cross contaminate her desserts with all the filth left behind by the dirty cooks who think they are clever because they know who Thomas Keller is. I was mocked for the way I made products, like anglaise, except the pastry chef who had been there wasn’t even cooking the products properly, putting customers at risk. I quickly learned that my standards of style and hygiene were no match, I couldn’t just “slice and serve” overly fatty, too sweet too little flavour slabs and garnish with out-of-season fruits.

Needless to say, when I had decided to keep an open mind about a new experience upon returning to my home town, I didn’t think quitting after 3 weeks would be the one.

Now I’ve taken a lateral shift. I’m in more of a pastry/bakery atmosphere. I’ll actually be a bitch who makes cake, I made 25 the other day. It’s weird but new and something I’ve never really been good at. I’m happy to become proficient in something new in my field. Often people think pastry chefs are pastry chefs, they know all the pastry. And they probably do, but unless they’ve worked in restaurants, cake shops, and pastry shops, they aren’t fluent in all the pastry.

But what I wanted to talk about here and now is the idea that restaurants desserts have to be complicated to be beautiful and delicious.

Before I hit the road, I designed a new dish for the resto that was easy, seasonable, and so bloody tasty. Beautiful, too. But so easy. They didn’t really have anyone to replace me (I trained someone, they didn’t work out, then a couple more didn’t work out, so they still don’t really have anyone, just the Chef), but I wanted to give them a transition dessert, something that would feel like I was still there but without all the cranky pants pouting (“why won’t anyone else put in a meat order??”) or coffee consumption (I’m down to 1 a day by the way). It had to be asian inspired, but also make sense in the Canadian market.

The base of this traditional French “tart” is frangipane, that delicious egg leavened almond sponge similar to a financier, baked with halved poached pear. It bakes up crisp on the outside and soft and fragrant inside. I used apple because pear just never sells. I love pear, but no one wants to buy them in my experience.

The secret ease of this dish is vodka. Orient Apple Vodka. 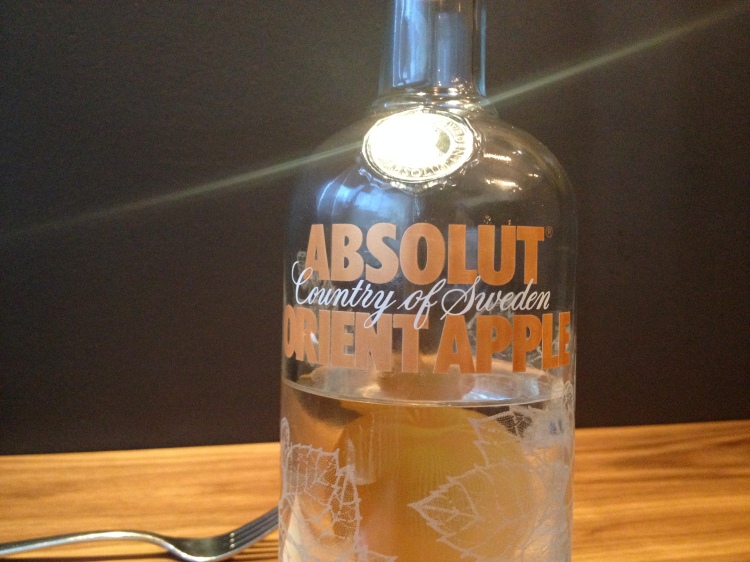 I sliced some Grannies and compressed them with a spiked vanilla simple syrup to give the apples some oomph, without a vacuum pack machine one could easily soak these for an hour or so. Pipe the frangipane into a tart shell or well greased tart ring (I make them sans-tart shell) on parchment lined sheet pan, then press the slices into the frangipane. I chill the tarts while the oven pre-heats to 350.

Bake the tarts until a knife comes clean, usually individuals come out after 20 to 30 minutes. They will have pulled away from the tart ring when fully baked. Remove rings.

Before serving, dust with icing sugar. I top it with ginger-oat granola and fresh brunoise of Grannies.

To really give the dish that intense apple flavour while using products in-house (as opposed to adding another thing to make or order in), I took vanilla ice cream, threw some into a frozen Kitchenaid bowl, and as it softened with a paddle, I poured the vodka (and boosted the vanilla) into the ice cream creating a flavourful vodka spiked soft serve. Chill for 45 min before serving.

The only “complicated” part is the “sauce” — I really dislike the use of anglaise, basically because it’s better frozen as ice cream, and unless it is infused with incredible flavour, what does it accomplish? More dairy and sugar and vanilla?

I’m good thanks. I prefer fluid gels. They are not as difficult as people think they are and they can be whatever you want, think or thin, acidic or sweet, alcoholic or fruity. In this case I chose sake as the base.

Boil water and sugar , once dissolved, add agar and whisk for 4 minutes while boiling. The agar must hydrate fully, essentially cooked for several minutes or it won’t set. Once hydrated, remove from heat, add vinegar and 3/4 of the Sake. Pour into a loaf pan and chill until set, about 20 minutes. 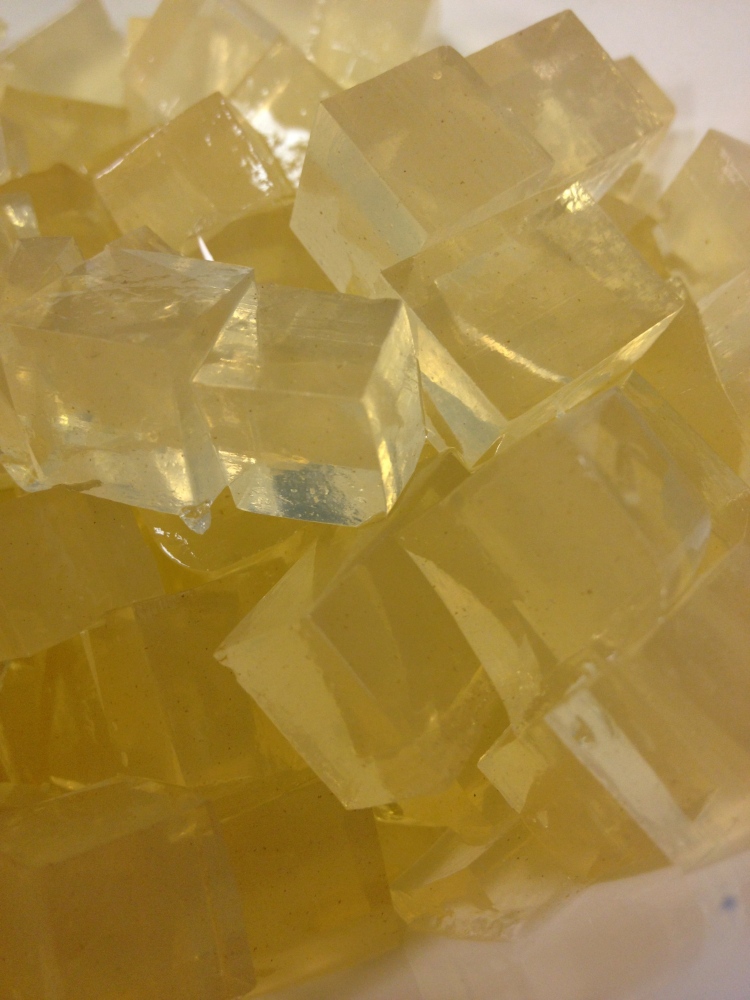 Once set, remove from cooler and score with a paring knife. You want to slice it into little cubes. Scrape into a blender, add a dash of sake and blend. Add more sake as needed until it is thick but moves freely in the blender. If it is too thin, no worries. It will still taste great, you just won’t be able to pipe it.

Smear or squeeze a healthy dose of fluid gel on your plate to anchor your tart. Finish as desired. 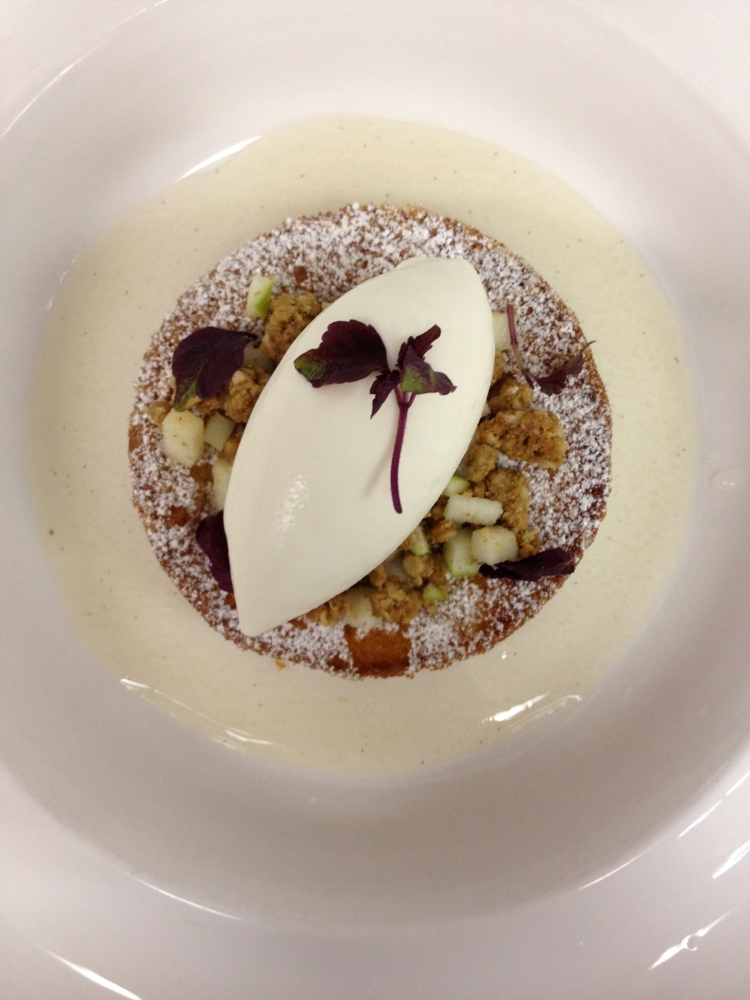 Gluten-free (if you replace the flour in the frangipane with corn starch,) yes.

Pretty. I think so.